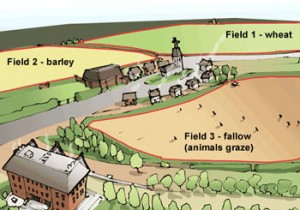 I don’t remember much from my history lessons at school, but I do remember learning about the three-field system. In Europe, way back in the Middle Ages, farmers would let one of their three fields lie fallow. In the autumn, one field would be planted with rye, barley or wheat, and in the spring, one field would be planted with oats, barley or legumes. The third would be left unplanted. Not only did this provide two harvests a year – thus reducing the risk of crop failure and famine – it also strengthened the soil as the fallow field would be allowed to recover. It might be treated with green manure to replace the nitrogen sucked out of it by its previous occupants, and the build-up of pests and pathogens that might occur if one crop were to be continuously cultivated would be avoided. Soil structure and overall fertility would also be improved.

I think you can probably see where I’m going with this.

For the last six months, I’ve been enjoying a fallow period of my own. I’ve not written a single word of fiction. This wasn’t through choice – although I wouldn’t say I’ve been suffering from writers’ block – it was through lack of desire. I simply had no urge to write. This was an odd sensation, or rather it was an odd lack-of-sensation. The need to write stories had left me with nothing but a shrug of its shoulders. I didn’t even feel that there was a void that needed filling; I just got on with life. I sorted out my home – if it was neither functional nor beautiful it went to the charity shop. I sorted out my ‘To Be Read’ shelf – some of which I read, some of which I sent to the charity shop. I sorted out my wardrobe … The charity shops did very well out of me last autumn. I quit Twitter and Facebook for a while. I spent more time with family and friends. I picked up my knitting needles (for the first time in 25 years) and made hats for those who wanted one, and hats for those who didn’t! I watched a lot of box-sets and dramas on the telly.

Looking back, I know I needed a break. I needed to lie fallow. In the first half of last year, I wrote a lot, produced a lot, got caught up in all the blogging, tweeting and facebooking that seems to go hand-in-hand with writing these days. My nitrogen needed replenishing, and I needed to be rid of the pests and pathogens that were nibbling away at my creativity. My structure and overall fertility also needed improving. I needed a time to rest and replenish. (I think I’ve milked about as much as I can from this particular metaphor.)

There were times, over the last six months, when I wondered whether the desire to write would come back. There were times I hoped it would, and there were times I hoped it wouldn’t. But it has. Two weeks ago, I started to get that aching, tingling feeling in my wrists again; it’s the feeling that usually proceeds a burst of creativity, and now that burst is here. I want to write. I need to write. A story, a blog post, a tweet … anything. So I have. I’ve run a #flashcomp at 1000words. I’ve written and submitted a flash-fiction. And now I’ve written a blog post.