1000Words: An Interview with Jacki Donnellan

Today heralds the start of a new series on my blog in which I’ll be interviewing some of the writers who have been published on 1000Words. My first interviewee is Jacki Donnellan, author of our latest story, Getting Myrna to Play the Piano.

So, without further ramblings from me, I’ll let you read what Jacki has to say about writing flash-fiction and her 1000Words experience.

What prompted you to submit your flash-fiction to 1000words?

I was very new to writing when I came across 1000words and the high calibre of the stories published on the site was something that I wanted to aspire to. I also really enjoy writing to a photo prompt.

How did you get from your chosen image to your final story.

The first draft of my story did the same thing as the image – it presented a metaphorical snapshot of Myrna’s mother’s life. It was okay, but not really engaging enough. Then I decided to work the dust on the piano keys into the story, instead of it just being a symbolic aspect of the photo. It gave me the extra layer that the story needed – that in fact Myrna could already play the piano beautifully, but had obviously not learnt to do so on her piano at home. By my final draft it felt like the photo had weaved its own way further into the story, which was lovely.

Other than images, what inspires your writing?

Random thoughts, middle-aged musings, and being a parent.

Which writers (or other creatives) have inspired you?

I am constantly inspired and encouraged by the writings and support of all the writers that I connect with on Twitter.

What is it you like about reading and writing flash-fiction?

A really good piece of flash tells a story that’s way longer than its word count. Writing a story that sits between the lines is challenging as a writer, and finding that story is satisfying as a reader.

What tips would you give to aspiring flash-fiction writers?

Join in with some of the weekly flash fiction contests that take place online. It’s a good (free!) workout and a great way to meet and read other writers. Check out www.flashfriday.wordpress.com and www.theangryhourglass.wordpress.com

Is there anything else you’d like us to know?

I am writing a novella. I am trying to say this publicly as much as possible to make myself get on with it. 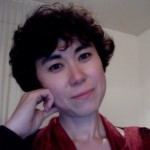 You can read Jacki’s story here and connect with her on Twitter.