It is never quiet where I am.

Tinnitus is any sound a person can hear that’s generated inside the body rather than outside. In other words, my ears and my brain hear noises that aren’t really there. I first noticed it in my late teens as a fax-machine-like beeping in my left ear. I’d only hear it late at night, when I was falling asleep, and it didn’t really bother me. Looking back it was probably caused by too many hours spent listening to loud music on my personal stereo and standing too near the speakers at gigs.

A few years ago, though, it got worse. I’d had a nasty cold which left me all bunged up, and I couldn’t hear properly out of either ear. I thought my hearing would improve after the cold got better, but it didn’t. For weeks, I felt as if I were under water. I had to really concentrate on conversations, and busy places made my head spin. Eventually, I went to the doctor complaining of headaches, hearing loss and an increase in the volume of my tinnitus. It sounded as if I were sitting next to a rushing river and surrounded by people blowing whistles and ringing bells. My doctor, bless him, told me it could be caused by one of two things: a virus or a brain tumor. Yes! Those were his exact words. Anyway, he referred me to the ENT department at our local hospital who saw me fairly promptly and who happily told me, after tickling my face with cotton wool and testing my hearing in an anechoic chamber, that they were satisfied it was a virus and that my hearing should return in time.

Well, time proved them right about it not being a brain tumor! And my hearing did come back after a few months. But, my tinnitus remains the same. It’s still there, rushing, whistling and ringing. All. The. Time. But I’ve learned to live with it. 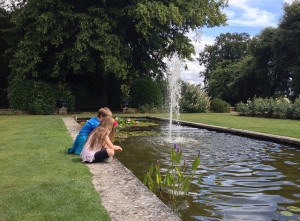 I saw a tinnitus therapist for a while. She was brilliant. She gave me a tinnitus mask which is a little devise you stick in your ear. It plays white noise to you and trains your brain to ignore the sound and others similar to it. I also had to avoid being anywhere silent. I had to have sound around me at all times – running water, passing cars, a whirring fan, a running washing machine, a radio on low in the background – to give my brain something else to focus on, so it could learn to ignore the noises in my head. Which it did. Most of the time, I don’t notice it. It’s as if my brain has switched to a different channel, but I can switch back if I want to, and if I do, it’s there.

The only time it’s a problem is if I have a cold and my head gets bunged up. Then the tinnitus makes itself known. Loudly! Sometimes this stops me sleeping, which, as I’ve said before, can trigger my anxiety. My brain won’t switch channel, and it won’t switch off. If this happens, I have to distract my mind with stories and employ my other anti-insomnia tricks. I’ve also got a set of pillow-speakers and a play list of white noise and nature sounds on iTunes that I can listen to to help re-tune my brain. As well as that, I consume decongestants by the tonne!