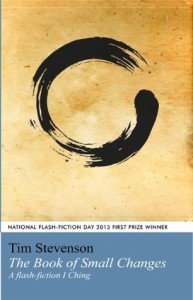 I first came across the writing of Tim Stevenson when his very short story, Alterations, was Highly Commended in the 2012 National Flash-Fiction Day Micro-Fiction Competition. In just 100 words, Tim managed to conjure a beautifully painful (and painfully beautiful) vision of life ‘after the accident’.

The next time I came across Tim’s work was while I was judging the 2013 1000words National Flash-Fiction Day Competition. After reading all the anonymous stories, my fellow judge and I selected two of his flash-fictions, Birds of Play and Hope in the Snow, for publication on the website. Both of these pieces were put unequivocally on the ‘Yes’ pile because they were everything that good flash-fiction should, in my opinion, be: small, subtle, perfectly-formed stories that stay with the reader long after they’ve finished reading them.

I was delighted when I heard Gumbo Press had published a collection of Tim’s fiction, and I was even more delighted to find all three of the above-mentioned stories inside it. Tim also won the 2013 National Flash-Fiction Day Competition with another of his stories, A Handful, which appears in this collection too, and it was this competition win, I’m informed, that led to the publication of this collection.

The Book Of Small Changes “takes its inspiration from the wisdom of the Chinese I Ching, replacing those ancient fortunes with new stories: where the sea mourns for those it has lost, where encyclopedia salesmen weave their accidental magic, and where the only true gift for a king is the silence of snow.”

I confess I hadn’t heard of the I Ching before picking up this book, so, as the book itself doesn’t contain an explanation, I had to Google it to get a feel for the theme. And that is my only criticism of The Book of Small Changes: I would have liked a brief introduction to the I Ching because once I did know what it was all about, I felt the stories acquired an additional layer of meaning and hung together in a way that they might not have done had I not done the research.

There are sixty-five flash-fictions in The Book of Small Changes, and each one is a gem on the I Ching necklace. Some sparkled brighter than others, but they were all beautifully cut in their own way. Tim has mastered the art of making every word count and writing with a subtly that leaves just enough to the reader’s imagination. When it comes to genre, this book has a good mix that definitely catered to my tastes: fantasy, magic realism, slice of life and literary fiction. There are stories that are funny, and stories that are touching and stories that are thought-provoking, and there even stories with that most elusive of qualities … the well-written twist ending.

The Book of Small Changes is published by Gumbo Press and is available from Amazon in paperback and as an ebook. The first eight stories are available to read via the ‘Look Inside’ feature.