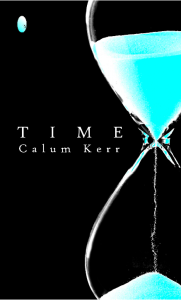 I’m no expert on the concept of time travel (I gave up physics after GCSE, and I only got a grade C in A-Level Maths.), but I admire anyone who can get their head around it the way Calum Kerr does in this flash-fiction collection.

In Time, we are treated to 31 very short stories all connected by the aforementioned concept. Some stand alone, while some follow on from others. Either way, we get to meet a wide variety of characters, some of whom invent (and un-invent) time travel and some of whom, for all sorts of reasons, simply make use of the facility – although ‘simply’ is probably completely the wrong word!

Even though, these stories are pure science fiction, they are still rooted in human experience; they still brim with those universal human desires and capacities: love, hate, loss, friendship, life, death etc. And while the stalwart plots of time travel fiction – such a killing Hitler – are definitely present, Calum puts his own spin on them so that they read as fresh as if they were completely new ideas.

It’s hard to pick a favourite from this collection, but the story that has stuck most firmly in my mind is Why Do Fools? which is the tale of a man who goes to extremely precise lengths to ensure his past happens the way it needs to to ensure he gets the future he desires. After reading it, I was left thinking about how our lives are so susceptible to the fluttering of butterfly wings.

One of the things I love about all of Calum’s writing is the confidence with which his different narrative voices speak. It doesn’t matter whether the story is being told by a traditional third-person, completely in dialogue or as an excerpt from an auction catalogue, it only takes the length of an opening sentence to make you realise you’re in capable and convincing hands.

Time is published by Gumbo Press and is available from Amazon in paperback and as an ebook.

Early one spring, a gardener sowed some pumpkin seeds in her freshly-hoed vegetable patch, and while she was dreaming of the pies she would cook with that autumn’s harvest, she heard a small voice speaking to her from above.

‘Hello,’ said a squirrel from his perch on the roof of her shed. ‘It’s been a long, cold winter, and I’m ever so hungry. Please would you spare me one of your seeds?’

The gardener frowned. ‘Why should I spare you one of my seeds?’ she exclaimed. ‘It’s not my fault you didn’t collect enough last year. Let this be a lesson to you, and perhaps this winter you’ll be better prepared.’ She flapped her arms at him until he ran away.

Laughing aloud, the gardener picked the fattest pumpkin in her crop and weighed it in her hands. ‘That’s odd,’ she said, her laughter fading. ‘This pumpkin feels rather light.’ With a frown, she turned it over and saw, in the other side, a hole as wide as her fist, and peering into the hole, she saw, to her horror, that the pumpkin was hollow – not a single seed or ounce of flesh remained. Dropping the pumpkin, she grabbed another and another and another, but it was no use; each and every pumpkin had a hole in it and each and every pumpkin was completely and utterly empty.

(This story was written in response to last week’s Angry Hourglass prompt.)

All right, I confess: I knew I was going to love this flash-fiction collection before I even bought it. David Hartley is another one of those fantastic writers I’ve come across in my capacity as editor and publisher of 1000words – we’ve twice selected his stories as winners in our flash-fiction flashcomps. We Three Things, was chosen in July 2012, and Marigolds won in February 2013. If you’ve got ten minutes to read them, both stories will give you a hint of the brilliance that abounds between the covers of Threshold.

Some of the stories in Threshold might be classified as science fiction, some as speculative fiction, some as magic realism, and some as being just a little off kilter with the world as we know it. However you choose to classify them, though, they do that thing that all good stories do: they bring the ‘real world’ into sharper relief by forcing us to examine our reactions to what we’ve read, and while the events written about in Threshold may not be familiar to us, the responses of its inhabitants certainly are. Of the thirteen flash-fictions in this collection, my favourites are Hinterland, The Golden Silence and Invader Guilt: three very different stories of attack and capitulation in which extraordinary things happen to quite ordinary people.

If I was forced to find something to criticise about this book, the only thing I would say is that it is too short, but the again, it’s always good to be left wanting more …

Threshold is published by Gumbo Press and is available in paperback directly from Gumbo and as an ebook from Amazon. You can find David Hartley at his website and on Twitter. 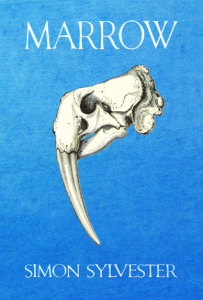 As a writer, I’m always looking for ways to share my work with the world, so when the opportunity arose to pick Simon Sylvester’s brains about why he chose to self-publish Marrow, his flash-fiction collection (reviewed here), I couldn’t resist. I hope you find Simon’s story as fascinating and inspiring as I do. Over to you, Simon …

In A Flash: Marrow

In May 2013, I was lucky enough to have Quercus take on my Scottish-island-murder-mystery The Visitors. For the next year, I lived in a twilight world of redrafts, rewrites and revisions, and although I had ideas in mind for my next few novels, I didn’t want to start anything big while I was still so engrossed in The Visitors. I had a lot of time between revisions, though, and I was itching to fill it with stories. I started writing lots of flash fiction – two or three pieces a week. These shorter stories satisfied my hunger, but kept me from committing to a distracting bigger project.

As The Visitors progressed along the traditional route, I found myself more and more curious about the mechanics of publishing. I needed a sense of how it worked. Self-publishing a collection of my flash pieces was the obvious choice.

The first step was collecting the stories. At the first pass, I had about 35 in mind. As I began redrafting, however, it became plain that some didn’t fit the overall tone – they were too whimsical, or too explicit, or too long. I cut until the collection felt cohesive, then bounced them off half-a-dozen friends as editors/proofreaders/punchbags.

I used the basics of InDesign to put the book together. It started out ugly and inefficient, but came together in a slow whirl of late nights, colour swatches, beer, gutters, bleed and trim. The cover is a walrus skull, taken from the British Library Flickr stream – more than a million historical pictures under Creative Commons licensing. I put my original cover on Facebook and took advice from dozens of people on how to improve it. I loved sharing that part of the process.

I had 100 copies printed, and I’ve been selling them at readings and through my blog. I think I have about 30 left. I’ve never made any massive effort to sell it or promote it. I enjoyed making it, and I’ll definitely do it again. I have the next two collections lined up. One of them is an expanded collection of my old Twitter Road Trip micro stories, and the other will be similar to Marrow.

I never considered seeking a publisher for the stories. With wonderful exceptions like J. Robert Lennon, Dan Rhodes and David Gaffney, I’ve never sensed any real hunger in the wider industry for flash fiction. I enjoy writing it, and I especially enjoying performing it, but I don’t think it’s taken seriously by mainstream publishers. Open mics and communities are where it really comes to life. That’s one of the reasons I love Flashtag and the Manchester scene – they make flash fiction really accessible. Gumbo Press are now looking for collections, which is great, and if I hadn’t already self-published, I would have probably submitted the collection for their consideration. But then I wouldn’t have the satisfaction of all those late-night hours of typesetting and kerning – the cursing, and the howling, and then the getting it right – the crowd-sourced cover. I made something, and I’m proud of that.

You can find Simon at his website and follow him on Twitter. Marrow is available to buy directly from Simon. The Visitors was published by Quercus Books in June 2014 and is available from Amazon.

Once in a while, I come across a book that is so right up my street it lets itself into my house, kicks off its shoes and curls up on my sofa, and this is one of those books. Marrow, by Simon Sylvester, is a self-published collection of 28 flash-fictions, only half of which have appeared in public before, and all of which are very fine indeed.

Before I even saw this book, I knew I was in capable hands.  About this time last year, I published one of Simon’s stories on 1000words, The Black and the White of It, so if you want a taste of the delights you can find in Marrow, pop over and have a quick read.

Are you back? Yes? Good story isn’t it?

I know the reason we buy books is so we can read the stories inside, but when a book feels good in my hands, the whole story-reading experience is enhanced, which is certainly what happened with Marrow. The paper it’s printed on is warm and smooth and heavy and feels great to hold. The cover is a thing of beauty, worthy of framing and hanging on the wall. Between the covers, each story has room to breathe on the page. The book itself is perfect.

As I said above, all of the stories in Marrow are very fine indeed. Since gobbling my way through them earlier in the week, I’ve found myself dipping in and out, again and again. Every story is beautifully-written. From a writer’s point of view, it was wonderful to be able to relax into a book and not find myself editing as I went – for me, there wasn’t a word out of place. From a reader’s point of view, it was wonderful to be swept away into other people’s lives for brief and powerful moments. The opening, and titular, story, was so near the knuckle it had me on the edge of tears. Snow on the Water, a tale about my favourite mythical creatures, Selkies, had me mesmerised. Hutch, a story of parental good intentions gone awry, had me holding my breath and left me reeling.

I know it’s a cliché to say that there’s something for everyone in this book, but I’m convinced there is. If you like short fiction (and some of it is very short) I’d encourage you to buy a copy.

Marrow is available from Simon’s website for the very reasonable price of £6. If you’d like to find out why Simon chose to self-publish this collection, come back on Wednesday to read his guest post on the subject.

(I was given a free copy of this book to read and review.)