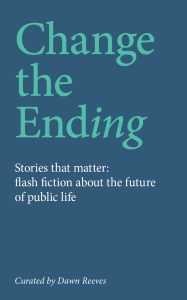 Following on from my review of the flash-fiction anthology Change the Ending on Monday, I welcome its curator, Dawn Reeves to my blog to talk about her involvement with and her hopes for the project. Over to you, Dawn …

I like what’s weird, wonderful and unexpected about the world, the sort of stuff that lies just beneath the surface of everyday life. And I’m one of life’s half full type people who believe it’s possible to make a difference. Small changes matter and big changes don’t happen by themselves. If you share any of these sentiments, you’ll find something in the Change the Ending collection to interest you. I started the project back in June and as Natalie’s review highlights, the collection is a quirky mix of creative stories about the behind the scenes bits of public life and people doing something to change it for the better.

My behind the scenes experience, producing the book – has been similar – unusual, challenging but also really uplifting. I know local government can be a hard sell, there’s precious light and people don’t know where the end of the tunnel is. I genuinely didn’t know what stories would emerge, what the collection as a whole look like, what it would become and what would become of it? So although the project is very close to my heart and I was determined to make it happen, at many points it felt pretty risky.

To keep me from losing the plot – I kept my focus on the practicalities, basically just doing it. I wrote a story myself, I ran workshops on how to get going with flash fiction, and supported, cajoled and chased anyone who showed any interest to have a go. I worked with a fantastic editor, Lisa Hughes, and Quarto Design, who made the book look and feel very classy.

Some of the tricky bits to negotiate included a stunning story about a tragedy that got pulled at the last minute because a Council was worried about it being misinterpreted. We had to decide what to do with a few stories containing lots of swearing (played safe in the end and took most of it out, still not sure about that decision though?) We had an eclectic mix of contributors, many more used to writing reports than fiction and some that had great ideas but had busted the word count three times over. Unfortunately we had to turn some stories down just because we had too many, which wasn’t a problem I thought we’d have to be honest. The great thing is that people got the idea and came forward with inspiring content.

This book aims to Change the Ending through stimulating a different debate, from the reviews so far I know it’s both entertaining and thought provoking. Does it really change things? In the end readers will be the judge of that but somehow – magically almost – it exists. It’s made me really positive about the power of story-telling and undertaking new creative projects in future.

I love Margaret Mead’s quote: “Never underestimate the power of a small group of committed people to change the world. In fact, it is the only thing that ever has.” Hats off to all the people who’ve pulled together the story collections that Natalie has reviewed, I appreciate the work, energy and imagination needed. And good luck to you with however you’re going about Changing the Ending!

You can find Dawn at her website. She also tweets as @Futuredawn. Change the Ending: flash fiction about the future of public life is published by Shared Press and available in paperback and as an e-book.