All Work and No Play 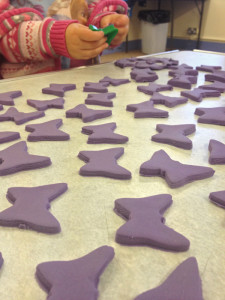 When I was young, I loved to draw, paint, cut, stick, glitter, build, mould, splat, scrunch, fold, print, sew, write, doodle, smear, cook, read, knit, dig etc., but somewhere along the line, I grew-up, stopped playing and started working, and those activities that couldn’t be classified as ‘work’ (or as ‘of benefit to others’) were left behind in childhood.

One of the bestest things about having little people in the family is that play becomes part of everyday life again. On Monday, I sat down with my four-year-old niece and a pot of playdough, and within ten minutes we had created a swarm of butterflies. We hadn’t planned to; we’d just squeezed the dough from its tub, rolled it flat, grabbed the first cutters that came to hand and while we chatted, the butterflies simply fluttered into existence. It didn’t matter that in a few minutes they’d be squished back into their pot and it would be as if they’d never existed – we were enjoying the moment and having fun.

When my own children were little, I spent hours and hours and hours playing with them, but now they’re older and more independent, we don’t play together nearly as much, and it wasn’t until I was cutting out our butterflies that I realised how much I missed it, how much I missed messing about, how much I missed making something just because I could. Sometimes it seems that everything we do should have a point and purpose outside of itself, but I’ve a sneaking suspicion that that’s a lie. (I hate the term ‘educational toy’!) Yes, play is an opportunity to learn about the world and to explore our passions and creativity, but it’s also an opportunity to be and do without the pressure of performance. Play for the sake of play is part of what makes life worth living, and I want to do more of it.

Do we really need the excuse of being children, or being with children, to make time for play?